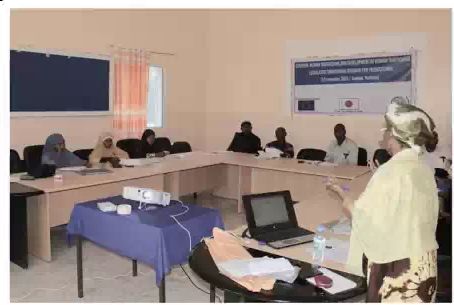 IOM, with support from the European Union and the Japanese Government, has organized two trainings oncounter trafficking and the development of a human trafficking legislative framework for 20 Puntland prosecutors.

Puntland is a transit point for mixed migration, including actual and potential victims of human trafficking. Trafficking victims in Somalia are mainly women and children, but adolescents and men are also affected.

The training was designed to improve the effectiveness of the authorities in addressing and prosecuting trafficking cases.

The two trainings were conducted by a human trafficking legal expert seconded to the Office of the Attorney General.

The training targeted prosecutors exposed to human trafficking in the course of their duties.

Emphasis was placed on improving their knowledge of the criminal nature of human trafficking and the ways in which it violates human rights.One of the aims was to improve their skills in detecting trafficking cases andimplementing anti-trafficking legislation in line with international standards.

Daria Fané, Head of Cooperation for the European Union (EU) in Somalia, said: “Supporting prosecutors in developing legislative knowledge regarding human trafficking is a key component of expanding the rule of law throughout Puntland.

The linking-up of police, justice and correctional professionalsin this respect remains a top priority for the EU$".