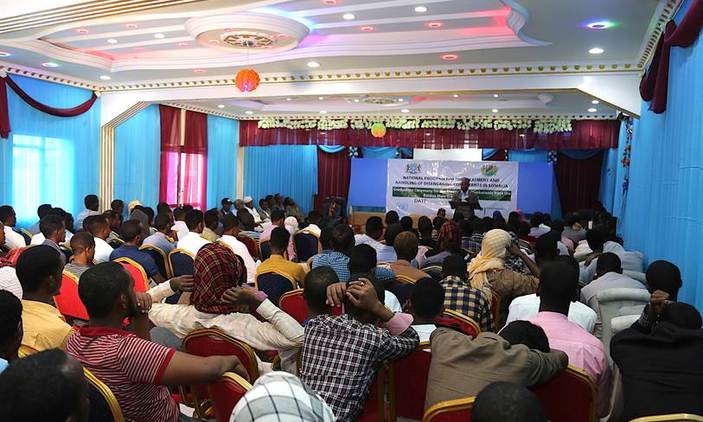 The programme graduates, comprising youths from various parts of the country, received vocational training and psychological support from the centre. They thanked the programme managers, saying they were ready to join their fellow citizens in contributing positively towards Somalia’s stabilisation process.
Present at the ceremony were officials from the South West administration, the International Organisation for Migration (IOM) and the United Nations Assistance Mission in Somalia (UNSOM) and representatives of various UN agencies.
While speaking at the graduation ceremony, South West State Disarmament, Demobilisation, and Reintegration (DDR) director, Ilyas Ali Nur, said the programme has proven to be a success. He noted that hundreds of youths who defected from Al-Shabaab have been trained and reintegrated into the community.

“On behalf of the South West regional government, I wish to announce that we are very happy with the success of this programme. This graduation is for 126 ex-combatants, who were previously misled, but now are fully rehabilitated,” said Nur.

The training and reintegration of former combatants is an integral part of the National programme for the treatment and handling of disengaged combatants in Somalia, led by the Office of the Defectors Rehabilitation Programme, under the federal Ministry of Internal Security.
The programme contributes to the long-term stabilisation of Somalia by promoting defections of Al-Shabaab combatants and reintegration of disengaged combatants into their communities.
Nur said the South West administration had played a major role in the success of the programme by providing security and necessary facilities, and monitoring progress of the defectors.
“We also promise that we will receive and welcome with open hands as many combatants as possible,” he added.
His remarks were echoed by Aden Hussein, IOM National Project Officer, DDR Programme, who noted that the rehabilitation programme will encourage more youths in Al-Shabaab to lay down arms and contribute to the country’s peace process.
“The ex-combatants undertook various vocational training lessons, among them, electricity, masonry, tailoring as well as welding,” Hussein said.
He called for more support for the programme, saying Al-Shabaab cannot only be fought using arms, but also through training and the reintegration of ex-combatants.
“This (DDR programme) is the best method, and hopefully the graduates will integrate back into the community and be constructive in their communities,” Hussein observed.
UNSOM, IOM, the German government and other development partners have supported the establishment of similar rehabilitation and transition centres in Mogadishu, Belet Weyne and Kismayo.
The centres offer vocational training and psychological counselling to prepare former combatants for their reintegration into local communities.