With Guns, Cash and Terrorism, Gulf States Vie for Power in Somalia 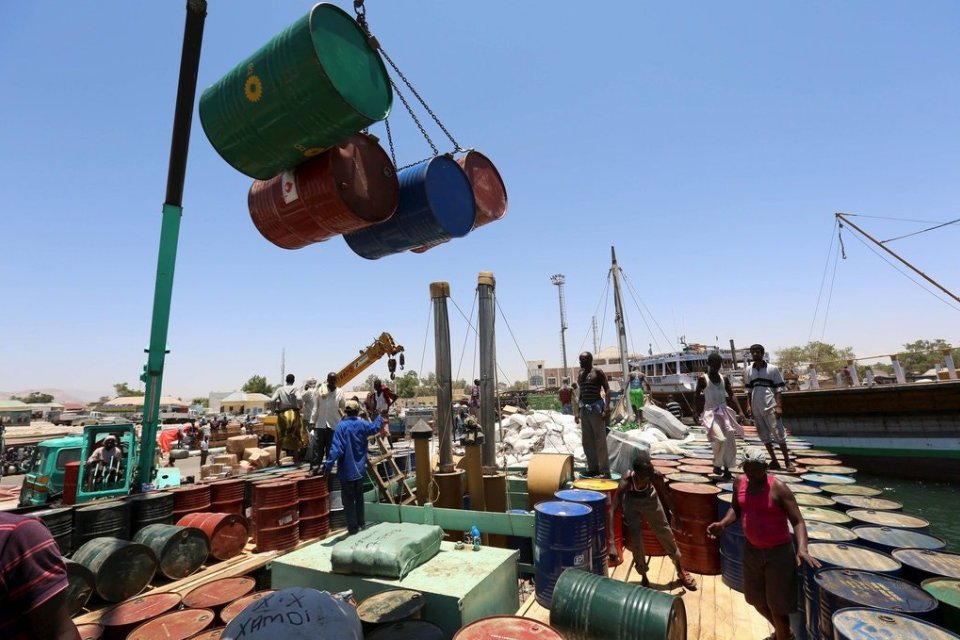 When a small car bomb exploded outside a courthouse in the bustling port city of Bosaso in northern Somalia, local news reports chalked it up to Islamist militants retaliating for American airstrikes. At least eight people were wounded, and a local affiliate of the Islamic State claimed responsibility.
The attack, however, may have also been part of a very different conflict: one among wealthy Persian Gulf monarchies competing for power and profits across the Horn of Africa.
Over the last two years, war-torn Somalia has emerged as a central battleground, with the United Arab Emirates and Qatar each providing weapons or military training to favored factions, exchanging allegations about bribing local officials, and competing for contracts to manage ports or exploit natural resources.
In an audio recording obtained by The New York Times of a cellphone call with the Qatari ambassador to Somalia, a businessman close to the emir of Qatar said that the militants had carried out the bombing in Bosaso to advance Qatar’s interests by driving out its rival, the United Arab Emirates.


“The bombings and killings, we know who are behind them,” the businessman, Khalifa Kayed al-Muhanadi, said in the call on May 18, about a week after the bombing.

The violence was “intended to make Dubai people run away from there,” he said, referring to the Emirates’ financial capital. “Let them kick out the Emiratis, so they don’t renew the contracts with them and I will bring the contract here to Doha,” the capital of Qatar.
If accurate, his claims are striking new evidence of the potential for the competition among Persian Gulf states to inflame strife across the Horn of Africa.
“Somalia is the most vivid example of the potential destabilization brought by the Gulf rivalry,” said Zach Vertin, a scholar at the Brookings Institution and a former American diplomat in the region. “The Gulf sees these states as clients. It is all about controlling the space: plant a flag in the ground and lock down territory and relationships before your rival can.”


The scramble for power in Somalia and the Horn of Africa is in some ways an extension of the cold war that has flared across the region since the beginning of the Arab Spring uprisings more than eight years ago. Qatar and Turkey backed the uprisings and the Islamist political parties that rose with them. The United Arab Emirates and Saudi Arabia opposed the uprisings and the Islamist parties, and accused Qatar of backing militants.
Two years ago, the United Arab Emirates, Saudi Arabia, Egypt and other allied states cut off commercial and diplomatic ties with Qatar in an effort to pressure it to alter its policies.
Somalia is an impoverished country, but its long coastline offers access to the region’s fast-growing markets and influence over vital shipping lanes from the Persian Gulf. An Emirati company manages the port in Bosaso.
Asked about the cellphone conversation, neither Mr. al-Muhanadi nor the government of Qatar disputed the authenticity of the recording, but both said that he was speaking as a private citizen and was not a government official.
“The state of Qatar’s foreign policy has always been one of creating stability and prosperity — we do not meddle in the internal affairs of sovereign countries,” the Qatar communications office said in a statement to The Times. “Anybody doing so is not acting on behalf of our government.”
However in the recording of the phone call, which was made by a foreign intelligence agency opposed to Qatar’s foreign policies, the ambassador expressed no protest or displeasure at the idea that Qataris had played a role in the bombings.

“So that’s why they are having attacks there, to make them run away,” the ambassador, Hassan bin Hamza Hashem, replied.

“Our friends were behind the last bombings,” Mr. al-Muhanadi, the businessman, assured the ambassador.
Mr. al-Muhanadi is known to be close to the emir, Qatar’s ruler, Sheikh Tamim bin Hamad al-Thani. There are photographs of the two of them together and, according to news reports and text messages provided by the intelligence agency, Mr. al-Muhanadi frequently travels with the emir.
In a brief telephone interview with The New York Times, the ambassador denied knowing Mr. al-Muhanadi and quickly hung up.
In a separate telephone interview, Mr. al-Muhanadi said that he was only a “school friend” of the ambassador’s. “I am a retired man and a trader,” he said. “I do not represent any government.”
Asked why he had described the Bosaso attackers as “friends,” Mr. al-Muhanadi said, “All Somalis are my friends.”
If the Bosaso bombing was intended to drive away the Emiratis, it was not the first attack there directed at them.
In February, two assailants disguised as fishermen shot and killed the manager for an Emirati company involved in running the port. The company, P&O Ports, said that three other employees were wounded.
The militant group Al Shabab claimed responsibility, saying that it had assassinated the manager because the Emirati company “occupies” the port of Bosaso. “We had warned him but he turned a deaf ear,” a Shabab spokesman said of the port manager, Reuters reported. “He was illegally in Somalia.”

Somali troops at an Emirati training program in Mogadishu in 2017. The Emirates ended the program last year, shifting its support to two provinces opposed to the central government.

In the cellphone recording, Mr. al-Muhanadi refers to the government’s contracts with DP World, the main Dubai company hired to manage ports in Bosaso and a city in Somaliland province. He says that a relative of the president “is with me” and will transfer the DP World contracts to Qatar.
The Shabab, an affiliate of Al Qaeda, and the Islamic State in Somalia, a smaller group, consider the Somali government their main enemy. The United Arab Emirates have carried out military operations against both groups, but it is unclear why those groups would side with Qatar, which has also supported the Somali government.
Qatar has denied supporting the Shabab or other militant groups. President Trump once accused Qatar of financing terrorist groups, but when Sheikh al-Thani visited the White House this month, Mr. Trump called him a friend and Treasury Secretary Steven Mnuchin praised him for helping combat terrorist financing.
American officials say that the charges against Qatar are selective at best, noting that many Persian Gulf monarchies have struck tactical alliances with hard-line militants or struggled to clamp down on donations to extremists by wealthy individuals.

Many Gulf states are close military partners of the United States, and Qatar is the home of a major American air base.
Of the Gulf states, the United Arab Emirates have moved most aggressively to spread influence in the Horn of Africa. The Emiratis sent teams of mercenaries and commandos to Somalia as early as 2012 to combat piracy off the coast, and they extended military operations to fight the Shabab and other militant groups.
Over time, the Emiratis established a ring of more than half a dozen commercial ports or military bases around the Gulf of Aden and the Horn of Africa, including a major military base at Assab, Eritrea, that was used to launch operations into Yemen.
During a severe famine in 2011, Turkey, an ally of Qatar, donated significant humanitarian aid, and then followed with extensive commercial investment. Turkey opened a major military base and training program in Mogadishu, the Somali capital, in 2017.

The Somali government initially sought to stay neutral in the regional cold war.
But in April 2018, the Somali authorities seized $9.6 million in cash from an Emirati jet at the Mogadishu airport. Emirati officials said the money was intended to pay the salaries of Somali soldiers and police officers under Emirati training. Somalia accused the Emiratis of planning to use the money to buy influence or otherwise destabilize the country.
Demanding an apology, the United Arab Emirates retaliated by cutting off cooperation with the Somali government, suspecting it of siding with Turkey and Qatar. The Emiratis shifted their support and operations to two northern provinces antagonistic to the central government — the breakaway province of Somaliland and the semiautonomous province of Puntland, which includes Bosaso.

The Emirati company DP World said in 2017 that it had agreed to invest $336 million under a 30-year contract to expand and run the port in Bosaso. The company pledged $440 million the previous year to develop a port in Somaliland.
Qatar moved quickly to capitalize on the Somali government’s rupture with the United Arab Emirates by fortifying its own ties. The month after the cash seizure, Qatari officials told Reuters that they were providing $385 million in infrastructure, education and humanitarian assistance to Somalia. In January, Qatar said it was also providing 68 armored vehicles to help the government fight the Shabab and other extremists.
The Shabab have fought against both sides in the inter-Arab cold war. The group has attacked Turkey for backing Somalia and its military. In May, the Shabab claimed responsibility for a car bomb that killed a Turkish construction engineer said to be working at the Turkish military training facility in Mogadishu.
In 2013, the Shabab attacked the Turkish Embassy, killing three people and wounding nine others.
If confirmed, the claim of the Qatari businessman, Mr. al-Muhanadi, would suggest that Qatar had at least tacitly condoned the attacks by extremists in Bosaso even as it helped the government fight extremists in Mogadishu. A former Defense Department official said he would not be surprised if Qatar was trying to play both sides to its own advantage.
Tricia Bacon, a Somalia specialist at American University in Washington and a former counterterrorism analyst for the State Department, suggested that Qatar did not need a deep relationship with the Shabab in order to hire local extremists for a more limited task, as “a proxy to conduct some attacks and disrupt the Emirates’ plans.”
The government of Qatar said it would investigate Mr. al-Muhanadi’s call to the ambassador. “He will be held responsible for his comments, which we reiterated do not represent our principles,” it said in a statement. “Somalia is an important partner for the state of Qatar, but we do not interfere in their internal affairs.”
In the telephone interview, Mr. al-Muhanadi blamed the Emiratis for the trouble in Somalia.
“Just talk to our friends from the simple people of Somalia,” he said. “They know that the Emiratis are responsible for destruction.”
Source: Newyork Times