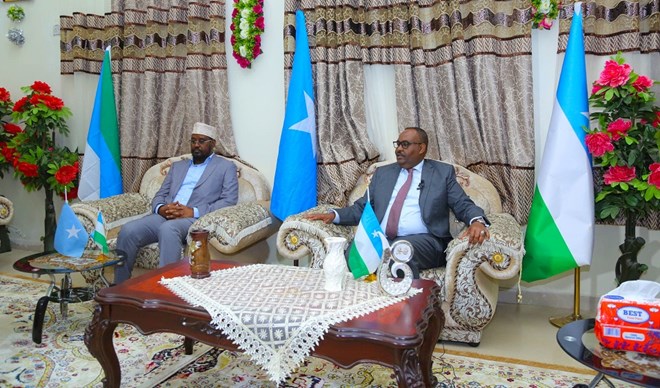 Puntland and Jubbaland leaders Monday have upped their calls for the release of Jubbaland Security Minister Abdirashid Janan who was arrested last August in Mogadishu following reports of human rights violations.

Jubbaland’s Ahmed Madobe and his Puntland counterpart Abdullahi Deni said a communique following a three days meeting in Bosaso the government should release Janan and also lift ‘sanctions’ on Jubbaland.

In a 16-point communique, the two leaders called on the Federal Government to cease interference with Federal Member States noting they were concerned ‘aid given to Somalia was used for political affairs which could affect the stability of the country.’

Amnesty International welcomed the arrest of Janan last September and called for his prosecution noting he was ‘reasonably suspected of criminal responsibility for crimes under international law and other serious human rights violations, including obstructing humanitarian assistance.’

On elections and legislations, the two leaders said the government had not prepared a suitable environment for universal vote for this year’s elections adding the recently passed Petroleum and Media Laws were against the spirit and letter of federalism.

The two states said they would establish a framework of cooperation and information exchange on development and war against terrorism adding they would work together to fully implement federalism.

The communique further called for consultations between the Federal Government and Federal Member States noting the current review process does not conform with dictates of articles 133 and 134 of the Provisional Constitution.

The two articles provide a roadmap for constitutional review process.

The two leaders also called for a meeting between the FGS and FMS to dialogue and iron out differences.